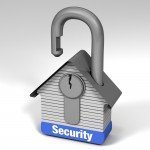 There are more than a few myths that we hear about home security here at KGBSecurity. But in our latest news post we put to bed some common attitudes people have about alarm systems and home security in general. Like many things, the attitude that you have towards home security will likely to influence how prepared you are to defend and how well you defend your home.

‘If someone wants to get in they will’

This attitude misses the point entirely since every single day burglary attempts are stopped from homes and businesses that have security measures in place. Burglars often looking for low risk easy options, therefore if you’ve got security systems in place, thieves will be deterred and find an easier target.

‘I live in a safe neighbourhood’

Thieves have cars and the statistics show that they don’t discriminate when it comes to choosing a neighbourhood to target. Every suburb is a target, not just those in affluent or poorer areas. The psychology of a thief means they often target homes and businesses that people perceive to be safe since they know they can often find flaws in these locations.

‘My insurance covers me so I don’t need to worry’

Insurance can only hope to recoup some of the losses that you might experience, but won’t prevent the losses in the first place. Often insurance won’t even be able to replace items of sentimental value and/or collector pieces. It also doesn’t cover the period of inconvenience while you wait for the police report and your claim to be processed.

“Security systems are difficult to operate”

‘I don’t have anything worth stealing’

Thieves don’t know that, and by the time they realise that it will be too late and they’ll have already forced entry to your home and caused damage. And since they’ve made the effort they’re not going leave empty handed. You might think you have nothing of particular value but nearly every home has something that you’ll miss if it was removed.

‘Locks only keep honest people out’

The meaning of this saying is so blurred it seems to suggest that if there were no locks supposedly honest people would become dishonest? The bottom line is that honest people don’t steal property. Opportunistic thieves do, but are frequently deterred by homes with multiple locks and robust security systems.

‘I live in the country. There are no thieves around here’

Homes in remote locations can be even more of a target as thieves can go about their activities away from the eyes of neighbours and any noise they make becomes far less of a factor. Like the safe neighbourhood myth, thieves can strike anywhere there is an opportunity – even in remote areas and homes on acreages.

When it comes to home security the team at KGBSecurity understand the real facts about home security and we’ll give them to you straight without the myths and misinformation. You can trust us to provide obligation free advice to strengthen the security around your home. So to find out how you can do just call the Brisbane security specialists here at KGB today on 1300 542 732.