Over the last 39 years I have opened thousands of safes. However with the proliferation of cheap safes that have flooded the market, I get a lot of queries over low or dead batteries on electronic digital safes.

The first sign (usually) that the battery dead on safe and won’t open is a longer series of beeps when you input your code. However if you only open your safe infrequently this may not stand out as a low battery warning. The safe not actually opening really is the definitive sign that the batteries are low. When you get no sound at all when you input your code you are being told the batteries are now completely dead.

Tutorial video on how to change the battery on your safe.

Batteries life will vary but 2 years would be an average.

The remedy for opening a safe with low or dead batteries will vary depending on the exact brand. I will outline some options. Digital safes fall into 2 distinct categories those with cheap solenoid locks. and those that use an after market. (Which is made by a company who only makes digital locks) digital lock.  The majority of cheapie safes are sold over the internet or by large hardware chains. They will usually have an over-ride key which is under a concealed cover and the batteries on the inside.

How an amateur destroys a safe with a dead battery; (1 min 14 seconds long)

Safes with higher grade digital locks will usually have the battery installed under the keypad.

Sometimes there is a plastic cover. On a lot of cheapies the batteries are inside the door. Other times it may have a “click” locking mechanism, try turning the key pad left or right or gently bumping the keypad upwards. Almost every digital safe (cheapie or not) has a safeguard built into the circuit board which allows the circuit board to remember the code even when the battery is dead for a very long time (ie several years). If you can simply install new batteries and input the correct code and you’re in.

Now if your cheapie safe still beeps when the correct code is entered but won’t open this will. Due to the amount of power to make it beep is much less than the power required to activate the solenoid. I have found I get lots more calls in the mornings and lots more in winter months or after a cold spell. So try opening the safe in the middle of the day or as the “code accepted” light illuminates gently banging the top of the safe with a shoe or rubber mallet. This may just give the solenoid that little bit of vibration to open. This is a quality safe lock – this keypad has the 9V battery under it ! A classic cheapie safe – with key cover in place Note the cover to the left of the keypad has been removed !

If you find the over-ride keyhole but don’t have the key you could take it to a locksmith provided it isn’t bolted down. ( I wont lecture you here about the futility of having a safe that isn’t bolted down). And they can pick the lock open for a very reasonable fee. When someone brings us a safe (and we are too busy to open it then and there). We wrap the top of the safe body and door with packing tape (pressure sensitive tape). Then get the client to sign across it with a permanent marker. This way we can open the lock but not have access to the contents which keeps everybody happy.

Lastly with the battery dead on safe. It is sometimes possible to undo the screws on the back cover of the door through the bolt down holes located in the bottom or body (back) of the safe with a long screwdriver. This is a bit of a long shot and again if the safe is bolted down not possible. So it can be a tale of woe if none of the above is applicable or possible. Lastly you will have to get a locksmith to come out and open it.

We use all sorts of techniques to open the safe. It has to be said if YOU can find a way to open your safe on Google then your safe is not very secure at all.

Whether you want to upgrade your safe, relocate a safe, or add additional security options, KGB has a solution for you. Browse our selection below. 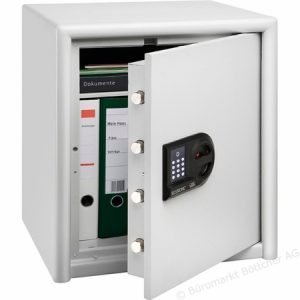 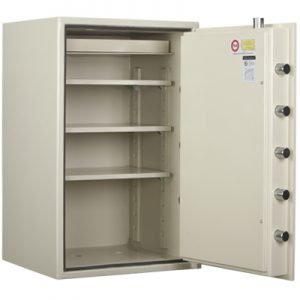