We ship our safes Australia wide! I have been in the safe industry for near 34 years and in that time I have seen lots of gun safes. They come and go, most of the time they are just the same old gun safes painted a different colour with a different badge. Well a few months ago I had heard about a new gun safe design that had lots of tongues wagging and last month I actually got to see it. Of all the gun safes Brisbane shooters put their firearms in most are pretty average until now.

The Lokaway gun safe range is priced close to most of the others on the market but it is very different in one way. Should this electronic keypad fail … there is a key over-ride !

The Lokaway gun safe has a patented “slide and lock” door. Its design virtually eliminates the risk of being forced open. If you have 2 gun safes side by side, one “garden variety” and one Lokaway. Then a crim attacks them with a prybar I assure you they will get into the “garden variety” one and WON’T get into the Lokaway. The door slides as it closes and then it actually locks behind the frame of the safe.
I am impressed with most of all the gun safes Brisbane gun owners have hidden away but the ones most at risk are the cheapie low grade ones. Of course if all gun safes were made of 12 mm steel rather than the standard 3 mm ones crims would have an even tougher time. However the Qld Weapons act says 3 mm walls are adequate enough. Thus many of the first gun safes we sold were expensive and slow to sell.

The Lokaway range of gun safes come with either a high grade 6 lever key lock or a digital lock.

The beauty of the lokaway digital is that it is a “standard specification” digital lock. Meaning if it fails in 5 or even 17 years you can buy a standard digital safe lock which will fit straight on. Most cheap safes use “non standard” digital locks and as such once they fail its a major job to install a new lock onto it.
In closing I invite you to look at a Cheapie and then compare it to a Lokaway gun safe. I am in no doubt which one you will choose. The digital version gunsafes have an emergency over-ride key. Come on down and take a look or view our gun safe range online we have a large range to choose from.

LOKAWAY has a 2 year on site warranty and if you buy a Lokaway safe from us. If it gets broken into we will replace it FOR FREE (excluding freight ) for up to 5 years from date of purchase. Most of the cheapies are easy to open ! This is a TYPICAL attack — brute force with a prybar – Cheap safes are EASY to bust ! 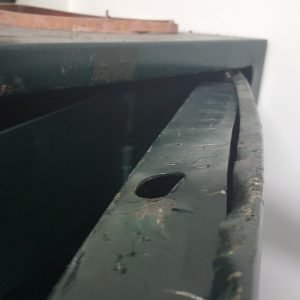