Vault and strongroom door removal anywhere in South East Queensland. Sounds simple however it can be a complex job. Most vaults and strongrooms are located inside commercial buildings. As such we can  do the job after hours to minimise the impact on business trading. There are two main types of vaults and two types of doors we see in Austalia. The first is “insitu vaults” which is simply a vault or strongroom that has been constructed as part of the building.

When the Banks first started opening branches throughout Australia they made the strongroom as a standard requirement. However the problem they found was that after they closed down a branch the cost of these strongrooms were not recoverable. To alleviate this they insisted all the new vaults were removable or modular. These modular vaults “bolted together” and could be easily removed when the Bank vacated the building. The doors attached to both insitu vaults and modular vaults are usually Bankers grade and as such weigh around 1400 kg,

We do Strongroom door removals anywhere in SE Qld

The second type of strongroom door is not actually a strongroom door as such although it looks very similar from the outside. This second door is called a “bookroom” door and they are as the term describes. Only used on a room used for the storage of records and documents. These book-room doors are not designed to withstand an attack from criminals. Very often the Banks had other heavy Bankers grade safes positioned inside same.

Removing a bankers grade door is quite common as most people want to make use of the room. Removing the door and frame is less common as this is considerably harder to do.  By comparison removing a Bookroom door and or frame is a relatively easy job.

We can also install both strongroom doors and bookroom doors. Bookroom doors are highly sought after for use in an armoury. Modular or demountable vaults can also be removed however they usually weigh between 14 to 32 tonne and may take a little more effort, regardless call us today to discuss any aspect of the above on 1300 556500 Removing a Vault door is a tricky job, however well within our skill set. 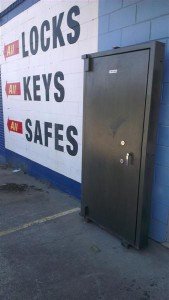 Strong room door removal, not for the average safe techy This vault wall is 400mm thick, the the embedded “Tang bar” can easily be seen.

Click here for info on Modular Vaults and strongrooms

Armoury door for Bunker or Vault

When Buying A Bank Vault Is A Good Idea

Angela Barlow
03:47 13 Aug 21
Called in with a padlock issue which was fixed on the spot. Wayne provided great advice on how to avoid the issue occurring in the future. Thanks :)read more

Hiba Bee
05:05 02 Jul 21
I needed my car key repaired, I had no idea if that was possible or if i was even at the right place. I rocked up at KGB Coopers Plains with no mask on and we are in LOCK DOWN :OI was KINDLY reminded that I needed to have a mask. No attitude, No frowning, just absolute POLITENESS. I eventually managed to find a mask in my car.Although they were not able to help me, they took the time to have a look at my problem (key) and even gave me a temporary solution. Thanking you Jamie. I was also directed to the right place/person and offered to call that person for me. Thanking you Wayne.Though this is just the normal way to interact with one another. It seems these days that a lot of people have forgotten that we all need one another and a simple smile or a kind word go a long way.Best customer service :) Once more, Thank you to both Jamie and Wayneread more

Anh Lim
04:41 17 Apr 21
Cal and his team are exceptional. One of our business safes wouldn’t open over the weekend... I contacted Cal on the Saturday and he organised a specialist locksmith to arrive at the store and sort out the problem. They provided prompt, professional and reliable service. I highly recommend KGB Coopers Plain!read more
Next Reviews
Contact info here - Click me